People and Animals in Urban Environments

Greater than 10% of the total land surface of the Earth is “urban land,” and the majority of people live in urban areas. Cities are not typically built with wildlife in mind, but nevertheless they still contain important habitat. Studies of urban wildlife are often overlooked when it comes to large scale, longitudinal in-situ research. Here at The Brandywine Zoo, we are investigating the prevalence of terrestrial mammals found in urban to rural ecosystems across Northern Delaware. Data collected in this project will allow us to better understand species diversity in urban environments, how animals shift their behavior patterns in regards to levels of urbanization, and how this impacts spatial ecology. In understanding what species are most typical, and atypical, by grade of urbanization, as well as when they are most active, we hope to inform conservation and land use decisions, maximize positive human-wildlife interactions while limiting conflicts, and better connect communities in general to the wildlife living right in their backyards.

Our project goals are to
1. Connect Delawareans to the wildlife living in our backyards
2. Understand how wildlife behavior is changing as our cities continue to grow.

In having a better understanding of urban ecosystems, we can help minimize human-wildlife conflict and maximize positive wildlife interactions.

Understanding varying levels of biodiversity within cities like Wilmington is pivotal to protecting it in the face of global urbanization. With the species data collected, our studies will additionally examine the effects of habitat fragment size and connectivity upon both ecological diversity and individual species distributions, predict biodiversity along a gradient of urbanization in Delaware, and analyze the relative importance of habitat quality, type, and location as well as the extent to which wildlife utilize ‘urban greenways’ both as wildlife corridors and as habitats in their own right. Outcomes from these analyses will not only help to push forward our understanding of ecology in Wilmington and other cities, but will also provide useful information to planners and managers as we work with them to plan for biodiversity preservation in urban regions.

For more information on this project, contact the Program Manager: 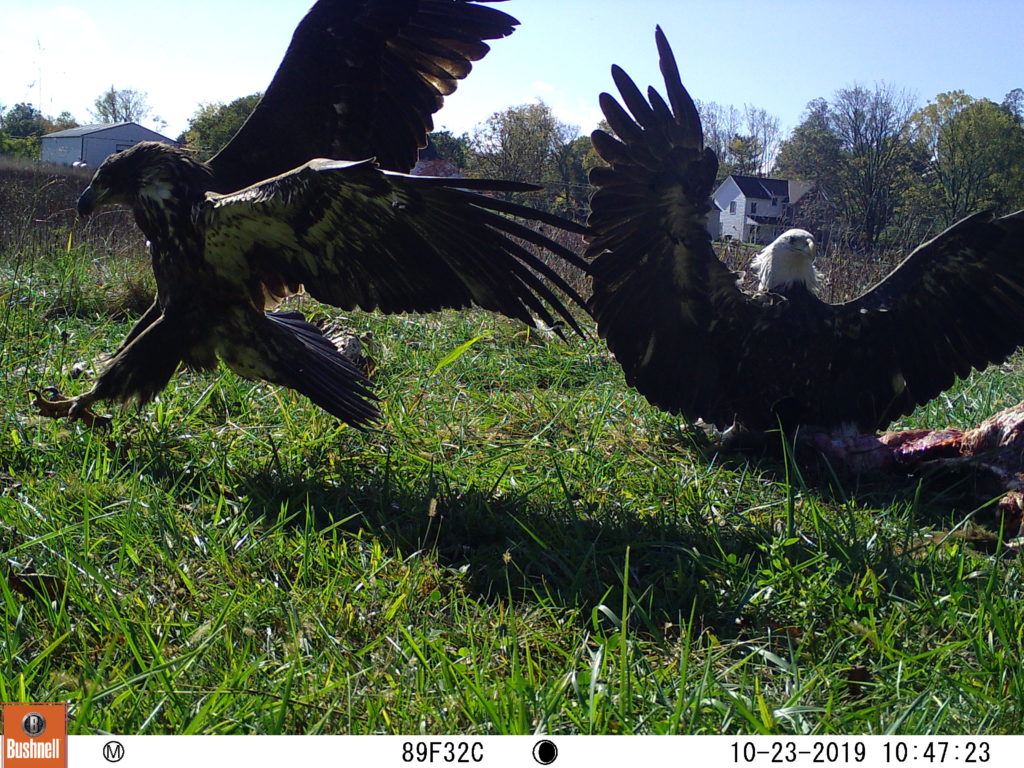 One primary goal in conducting these various urban wildlife studies is to serve as a source of information for the public, as well as operate as a centralized repository urban wildlife data and public reporting of wildlife sightings. It is critically important that with public awareness comes education revolving around peaceful coexistence, better understanding wildlife behavior and proactive measures people can take to reduce conflict, responsible management and land use decision-making, and developing empathy for wildlife. 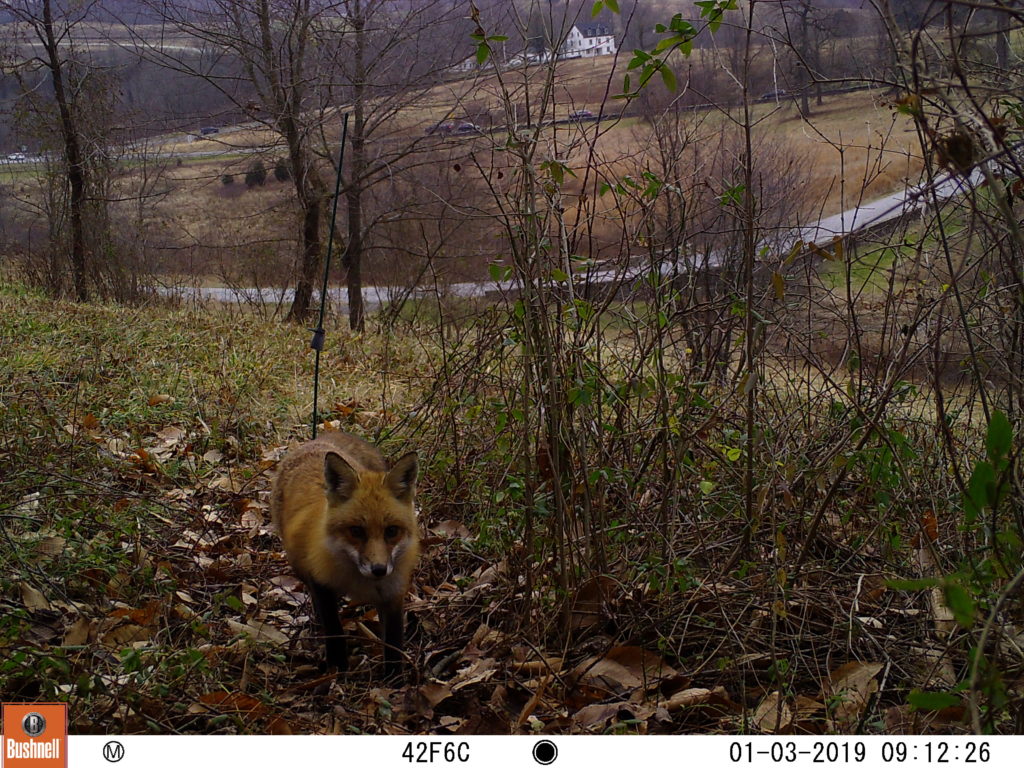 Cities provide a unique opportunity for science. They are the fastest growing ecosystem on the planet and the high number of people living in them provides an untapped and valuable opportunity to engage the public in the process of ecological research and connect people to nature. Most Delawareans are unaware of the diversity of wildlife that call this state home, particularly in the highly urbanized area where this project takes place. Awareness of the species revealed in these studies may bring a predictable mix of emotions from the public, from fear and concern to curiosity and wonder. Understanding the local wildlife sharing our urban areas will allow us to mitigate human-wildlife interactions, make recommendations to urban planners and land managers for least-impactful human activities for sensitive species, and contribute to a variety of additional research or plans that will benefit the local population as well as wildlife. The data collected in this project are ultimately helping us understand wildlife behavior, the impacts human development and activity has on the wildlife we share our cities with, as well as how that wildlife adapts to life with us.

In the fall of 2017, The Brandywine Zoo partnered with the Lincoln Park Zoo’s Urban Wildlife Institute (UWI) to conduct passive monitoring of wildlife within the State of Delaware. This project specifically focuses on monitoring green spaces inside and outside of Wilmington, Delaware at field sites along an urban to rural gradient. This monitoring project is conducted using game cameras placed along a transect running through rural to urban areas in New Castle County. The images and activities observed will be used to help connect people to nature and educate the public about the importance of biodiversity within a natural community.

The Urban Wildlife Information Network(UWIN), is a collaborative group of cities working on urban wildlife projects across North America. The Brandywine Zoo was the first the organization on the East Coast partnered with the UWIN, which is now in more than 20 cities across the continent, as well as the first additional zoo to partner with Lincoln Park Zoo for this initiative. We joined with the goal to study and report on urban wildlife activities in the Delaware valley to the greater network, but also to better connect our own communities to the wildlife in our backyards.

One goal of UWIN is to provide resources to study, conserve, and manage wildlife from the city to individual site level. Collaboration with UWIN partners includes other urban wildlife monitoring programs across North America, but also with city planners, landscape architects, and land managers, who are all working together to develop, inform, and guide urban wildlife conservation efforts in the future. Our partnership also provides quality information that can help advance scientific understanding of urban wildlife species and their behaviors. These advances in understanding can aid city planners and architects on best-use-practices for decreasing the impacts human activities have on urban wildlife populations.

Map of our camera transect across New Castle County, DE.

Another project in our UWMPs is our Carnivore Ecology Project (CEP), which studies carnivore guilds and focuses on identifying the presence of North American river otter and coyote across Northern Delaware. In the CEP, we are looking at how these cryptic, apex carnivores are influencing mesopredator guilds and species diversity, as well as how they are influenced by levels of urbanization and human disturbance.

These two species, coyote and otter, have very different public perceptions, with charismatic otters well-loved and celebrated while coyote hold the title of most persecuted carnivore in North America-with over half a million (about one per minute) exterminated annually in the U.S. If the otter is the flagship species for public adoration, the coyote is a flagship for all misunderstood and exploited carnivores. The CEP project will help to shed some light on the natural history and ecology of both these species in Delaware while generating enthusiasm and buzz for our citizen science project as we share camera images with awareness messaging.

Coyotes, historically absent from Delaware, have been slowly colonizing the state for the last decade and their range is not well known. Where they are present, they fill the apex carnivore role needed to balance deer and other prey populations, while also influencing small carnivore population guilds.

More specific studies on Delaware’s urban carnivores will allow us to better understand carnivore guilds and how coyotes are influencing the diversity and populations of other small carnivores, known as mesopredators, that find themselves in the “middle” of the food chain, such as raccoon, red and grey fox, skunk, and opossum. Studies have shown that coyotes increase biodiversity by preying on these other small carnivores, who in turn prey on birds and their eggs, rabbits, groundhogs and other small animals. We hope to study the effects of small and medium carnivores across various ecosystems and better understand what species are filling the role of “apex” predators at different locations and levels of urbanization. As we see more coyote move into Delaware, we have the potential to see shifts in predatory guilds occur as these carnivore populations change and expand. 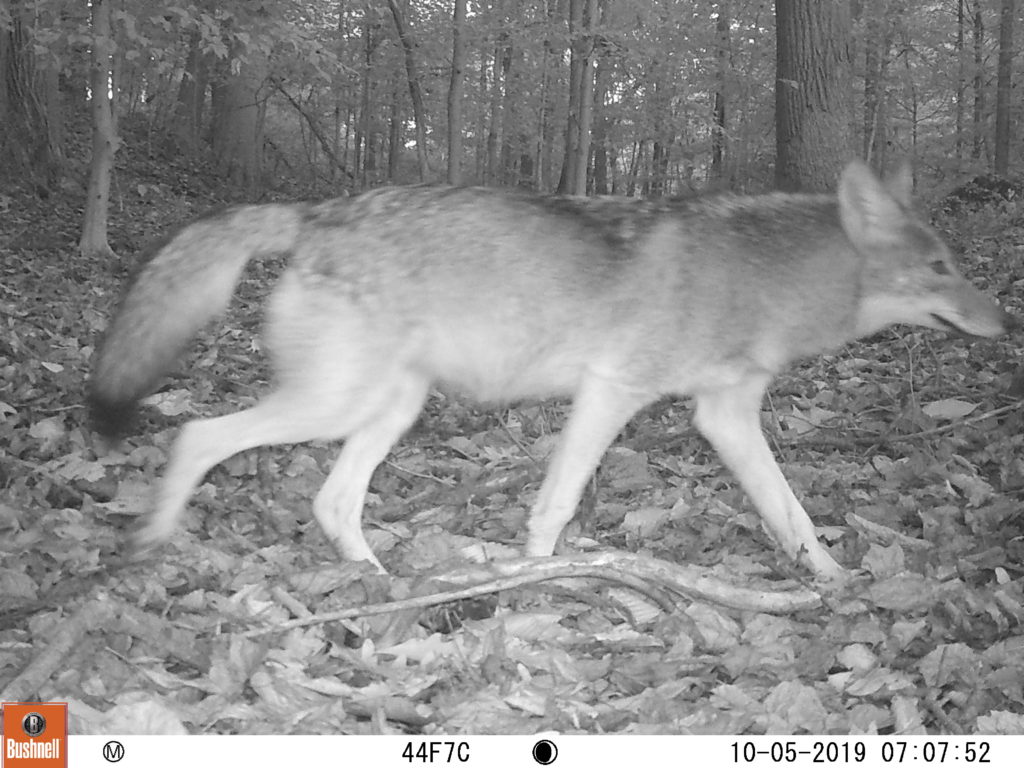 Otters are an indicator species for ecosystem and watershed health. They are sensitive to water pollution and tend to be absent from very polluted waterways. The presence or absence of these charismatic species can tell us a lot about the health of a habitat. Our studies of North American river otters in urban ecosystems will additionally help to raise awareness of this publically loved species and its ecology.  Our camera trapping project will hopefully shed some light on this charismatic species and help generate enthusiasm and buzz for our citizen science project.

River otters’ sensitivities to water pollution but recent comeback across North America as watersheds have improved over the years is a good sign, however it is unclear how many call our urban waterways in Delaware home. As sentinels for watersheds, and their presence, absence, health, and fertility can offer us valuable information on the health of the watersheds in which they live not only for their own sake but also the health of other wildlife and that of people utilizing the same water. Their increasing presence is good news and shows that we have made enough improvements in Delaware watersheds, and we hope to use this species as a platform for continued watershed support and research. 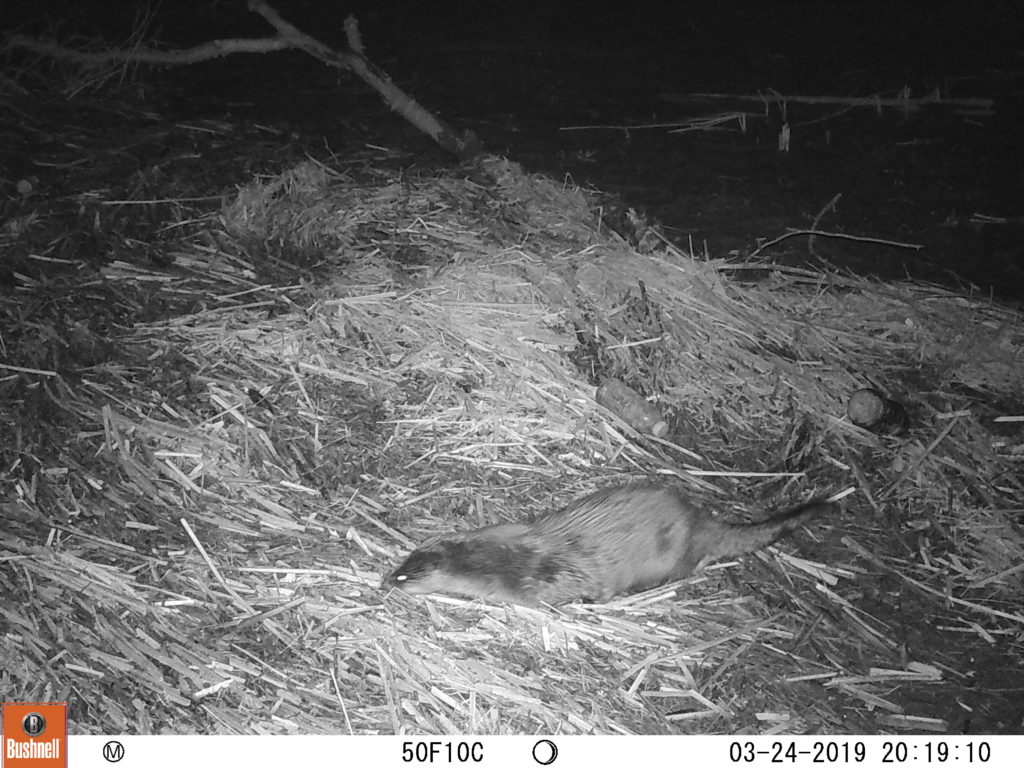 This project investigates the succession of scavengers at ephemeral carcasses. What does this mean? Basically, what scavengers are opportunistically making use of deceased animals at different locations across New Castle County and Southeastern Pennsylvania, what habitat and human features may dictate what species show up at varying locations, and in what order.

Why does this matter? Scavengers are an important part of any ecosystem. They provide vital waste removal services for people and may help reduce the spread of disease, especially when avian scavengers like vultures consume a carcass before mammalian ones can. Understanding our scavenging community in the Delaware Valley can help us learn about things like wildlife disease risks, which species are providing these services in what locations, or even risks to wildlife for things like lead poisoning (from hunter gut piles).

Get involved with our research!

Get started by joining our iNaturalist project and use your phone to snap photos and log data any time, from anywhere!

Get even more more involved by setting up a wildlife monitoring camera on your property and submitting your photos to our project!

Become a Community Scientist with your own wildlife camera!

How to get involved:

If you answered YES! to any of these questions, you can get involved with our wildlife game camera surveys. Check out the guide by clicking it on the right to view or click here to download it. 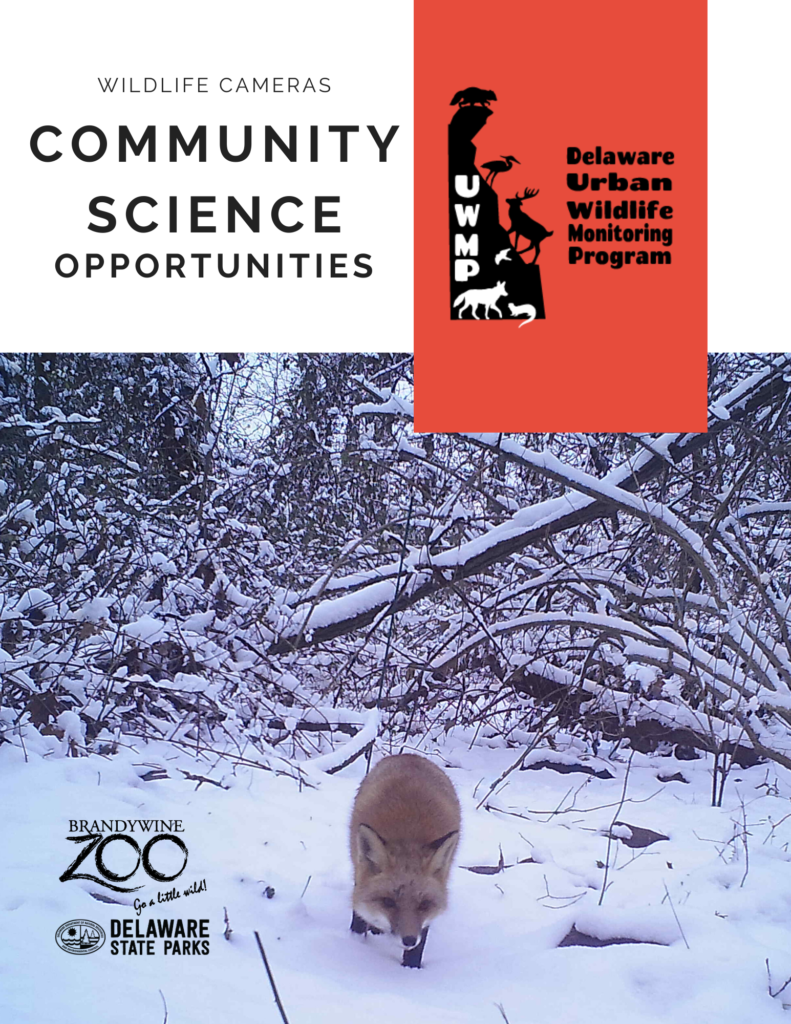 iNaturalist, available as an app or online, is a citizen science program that allows users to snap photos of any plant or animal and crowdsource IDs. Images on iNaturalist can be used by researchers for focused projects on specific species or regions.

iNaturalist users can join the Brandywine Zoo’s Urban Wildlife Monitoring of Delaware project to their user profile by doing a projects search, then start adding your photos and tagging wildlife! By getting involved with iNaturalist you can help us learn what animals are using Delaware’s landscape!