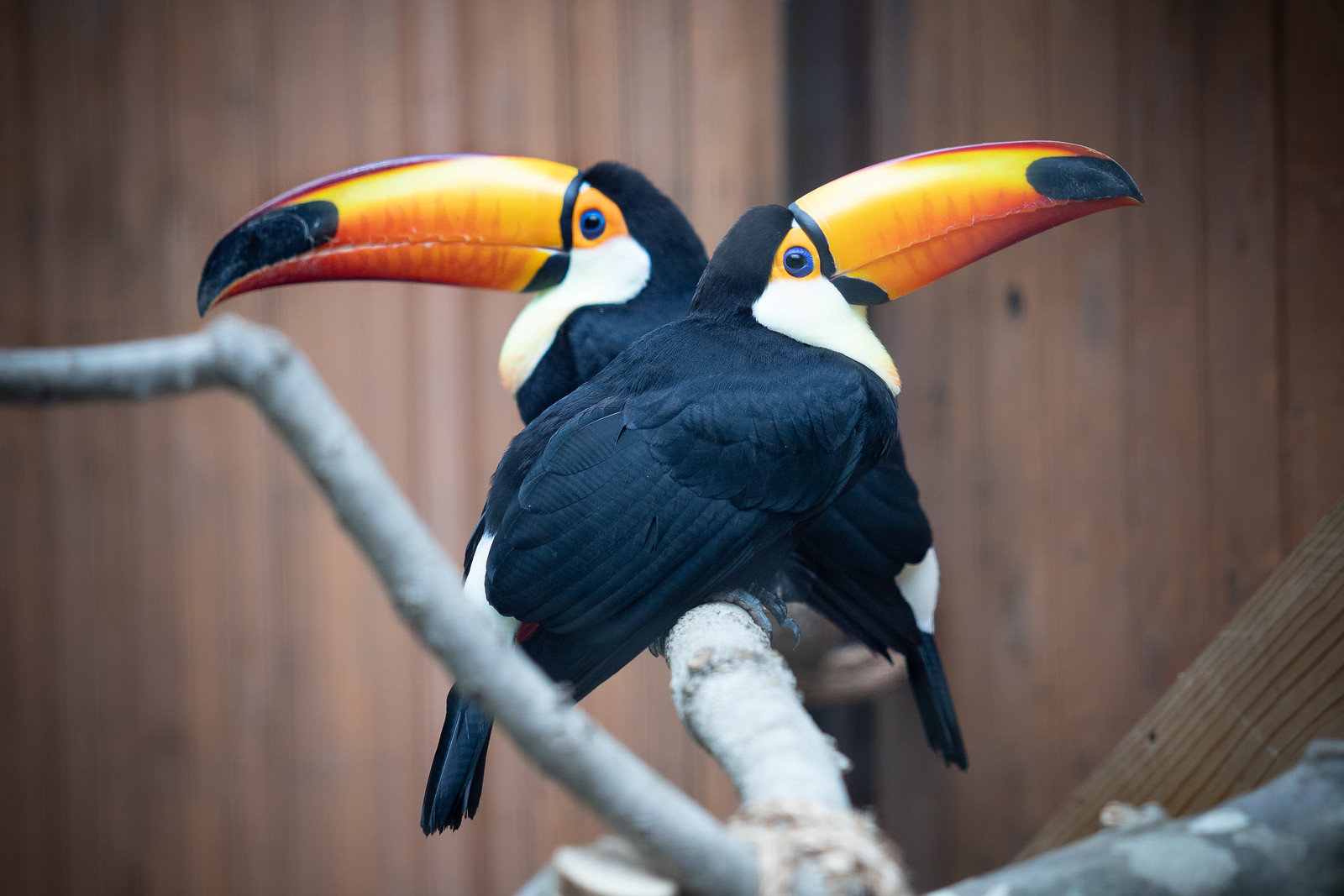 The Brandywine Zoo is home to a pair of toco toucans, Pablo and Julio. Our female, Pablo, was hatched in 2016 and came from an AZA facility in Florida in 2020. She is slightly smaller than our male, Julio. Julio hatched in 2002, and came to the Brandywine Zoo from the Bronx Zoo in 2019. He has a few white scuff marks on his bill that make it possible to tell him and Pablo apart.

HABITAT
Semi-open areas, such as woodland, grasslands, or plantations/farmland.

PHYSICAL DESCRIPTION
Toco toucans are the largest of all toucan species. They have a black body, white throat, and a large yellow-orange to red-orange colored beak with a distinct black marking at the tip of the bill.

LIFESPAN
Usually mid to late teens, up to 20-25 years

THREATS
Fortunately, the population of toco toucans is relatively stable, however other forest toucansare under threat due mainly to the deforestation of the Amazon Rainforest to make way forcattle ranches and roads.
Hunting and trapping toucans to be pets or stuffed trophies is also a danger to the populations of many toucan species.

REPRODUCTION
• In order to charm a potential mate, these birds will share food by tossing fruit to each other.
• Baby toucans do not have their large beaks when they first hatch. It takes several months for the beaks to grow in.

BEHAVIOR
• They can fly, but often prefer to hop from branch to branch.
• Toucans don’t use their tongues to swallow – they tilt their heads back to allow food to fall into their throats.

SOCIAL STRUCTURE
• Toco toucans can be solitary, meaning they live, or live in pairs or even small flocks.
• During breeding season, male and female pairs stay together totake turns incubating the eggs and feeding the hatchlings forthe first 2 months or so after hatching.

COMMUNICATION
• Toco toucans can be very loud! Their most common vocalizations are ‘croaks’ that some describe as ‘frog-like’ and have a range of meanings.
• They will also clack their beaks, or rattle their stiff tongues inside their beaks. These noises often serve as a warning to other animals.

Toucans’ calls can be heard up to a half mile away!

The toucan’s beak appears quite heavy, but is actually light. It is hollow and made of keratin with thin rods of bone to support it – the inside has a similarconsistency to a very hard sponge.

Toco toucans are the largest of all toucan species!

Unlike most toucans, tocos don’t live in forests – they prefer open areas likegrasslands or shrublands.

Toucans use their bills to thermoregulate – to control their internal bodytemperature. Having a big bill helps to keep these birds cool!

What are AZA Zoos doing for Toco Toucans?

Their zoo population is managed through conservation breeding programs called Species Survival Plan programs, which ensures genetic diversity and species health. While toco toucans are not currently endangered, they do face some threats in their natural habitats which include alteration of their habitat, hunting, and the pet trade. AZA zoos are working to maintain a long-term, genetically valuable population of toco toucans through their SSP program. 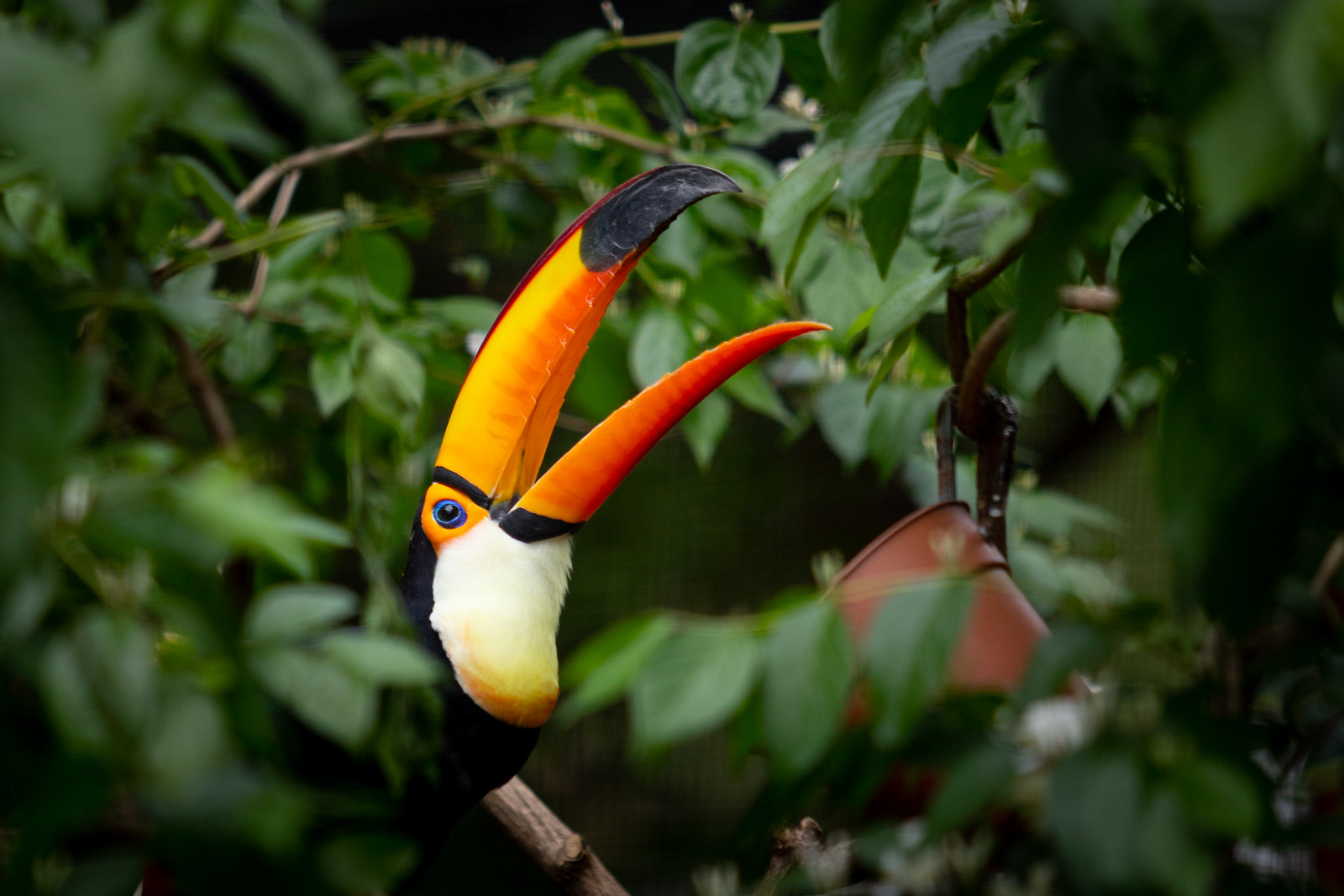 More images of our Toco Toucans 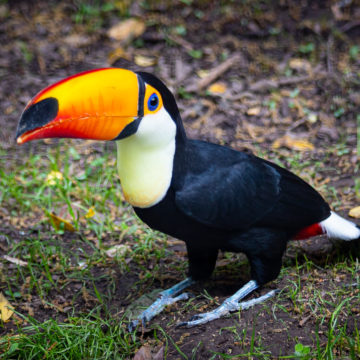 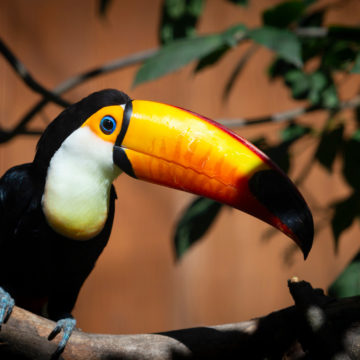 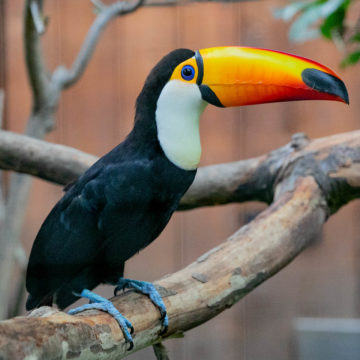 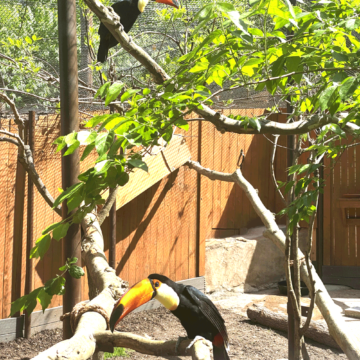